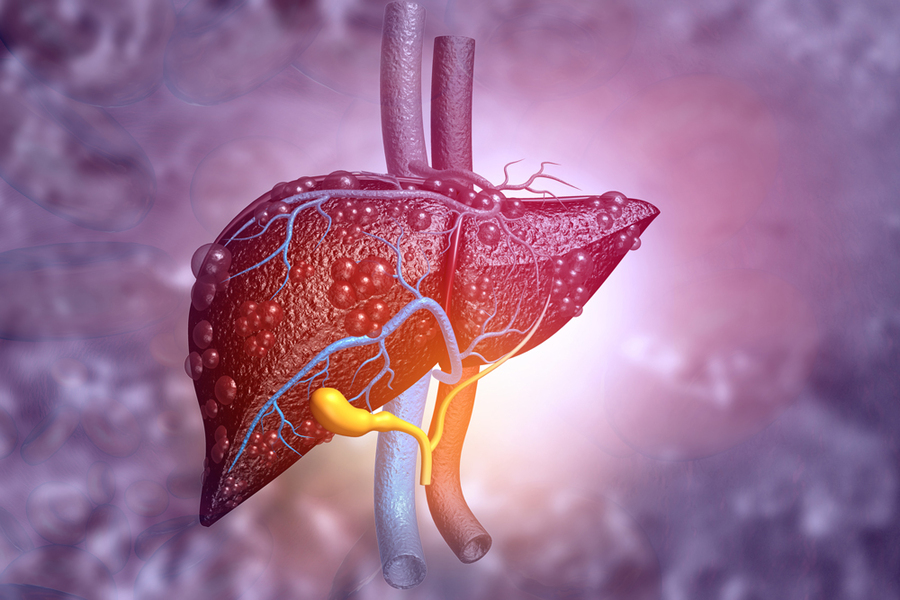 Massachusetts Institute of Technology engineers have developed a diagnostic tool based on nuclear magnetic resonance (NMR), which can be used to detect fatty liver disease and cirrhosis. Credit: MIT

Diagnosing liver damage earlier could help to prevent liver failure in many patients.

About 25 percent of the U.S. population suffers from fatty liver disease, a condition that can lead to fibrosis of the liver and, eventually, liver failure.

Currently there is no easy way to diagnose either fatty liver disease or liver fibrosis. However, MIT engineers have now developed a diagnostic tool, based on nuclear magnetic resonance (NMR), that could be used to detect both of those conditions.

“Since it’s a noninvasive test, you could screen people even before they have obvious symptoms of compromised liver, and you would be able to say which of these patients had fibrosis,” says Michael Cima, the David H. Koch Professor of Engineering in MIT’s Department of Materials Science and Engineering, a member of MIT’s Koch Institute for Integrative Cancer Research, and the senior author of the study.

The device, which is small enough to fit on a table, uses NMR to measure how water diffuses through tissue, which can reveal how much fat is present in the tissue. This kind of diagnostic, which has thus far been tested on mice, could help doctors catch fatty liver disease before it progresses to fibrosis, the researchers say.

Fatty liver disease occurs when liver cells store too much fat. This leads to inflammation and eventually fibrosis, a buildup of scar tissue that can cause jaundice and liver cirrhosis, and eventually liver failure. Fibrosis is usually not diagnosed until the patient begins to experience symptoms that include not only jaundice but also fatigue and abdominal swelling. A biopsy is needed to confirm the diagnosis, but this is an invasive procedure and may not be accurate if the biopsy sample is taken from a part of the liver that is not fibrotic.

To create an easier way to check for this kind of liver disease, Cima and his colleagues had the idea of adapting a detector that they had previously developed to measure hydration levels before and after patients undergo dialysis. That detector measures fluid volume in patients’ skeletal muscle by using NMR to track changes in the magnetic properties of hydrogen atoms of water in the muscle tissue.

The researchers thought that a similar detector could be used for identifying liver disease because water diffuses more slowly when it encounters fatty tissue or fibrosis. Tracking how water moves through tissue over time can reveal how much fatty or scarred tissue is present.

In a study of mice, the researchers showed that their detector could identify fibrosis with 86 percent accuracy, and fatty liver disease with 92 percent accuracy. It takes about 10 minutes to obtain the results, but the researchers are now working on improving the signal-to-noise ratio of the detector, which could help to reduce the amount of time it takes.

The current version of the sensor can scan to a depth of about 6 millimeters below the skin, which is enough to monitor the mouse liver or human skeletal muscle. The researchers are now working on designing a new version that can penetrate deeper below the tissue, to allow them to test the liver diagnosis application in human patients.

If this type of NMR sensor could be developed for use in patients, it could help to identify people in danger of developing fibrosis, or in the early stages of fibrosis, so they could be treated earlier, Cima says. Fibrosis can’t be reversed, but it can be halted or slowed down through dietary changes and exercise. Having this type of diagnostic available could also aid in drug development efforts, because it could allow doctors to more easily identify patients with fibrosis and monitor their response to potential new treatments, Cima says.

Another potential application for this kind of sensor is to evaluate human livers for transplant. In this study, the researchers tested the monitor on human liver tissue and found that it could detect fibrosis with 93 percent accuracy.

In this article:cirrhosis, fibrosis, gastroenterology, Massachusetts Institute of Technology
Up Next:

Study finds why drinkers have difficulty paying attention while under the influence.