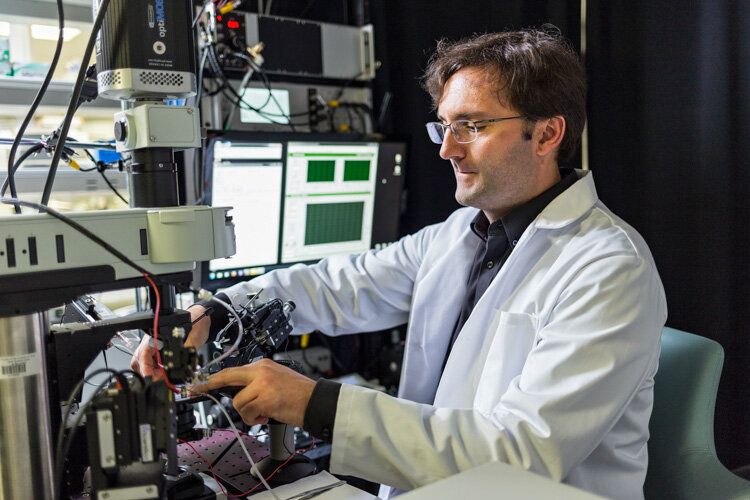 Martin Paukert, M.D., of the Joe R. and Teresa Lozano Long School of Medicine at The University of Texas Health Science Center at San Antonio, is studying astroglia cells and how they interact with neurons in the brain. Credit: UT Health San Antonio

In a new paper, researchers from The University of Texas Health Science Center at San Antonio (UT Health San Antonio) report brain chemistry that may contribute to why drinkers have difficulty paying attention while under the influence.

“When we want to focus on something, or when we stand up from a chair and become active, a brain stem nucleus releases a chemical called norepinephrine. Acute exposure to alcohol inhibits this signal in the brain,” said senior author Martin Paukert, MD, assistant professor of cellular and integrative physiology at UT Health San Antonio. When attention is needed for a task, norepinephrine is secreted by a brain structure called the locus coeruleus. Scientists previously did not understand well what happens next, but Dr. Paukert and the team showed that the norepinephrine attaches to receptors on cells called Bergmann glia. This leads to a calcium rise in these cells.

Bergmann glia are astrocytes (caretaker or supporting cells) in the cerebellum, a region near the brain stem. “To our knowledge, this paper is the first description that norepinephrine in mammals directly binds to receptors on the Bergmann glia and activates them through calcium elevation,” Dr. Paukert said.

The researchers focused on the Bergmann glia but also demonstrated that the same phenomenon occurs in cortical astrocytes. “Most likely vigilance-dependent astrocyte calcium activation is inhibited throughout the brain by acute alcohol intoxication,” Dr. Paukert said.

Persons under the influence are off-balance when they walk. The researchers expected to find that the inhibition of calcium rise in Bergmann glia would also explain this. It didn’t. “The calcium elevation in Bergmann glia is not critical for motor coordination, which is somewhat surprising because the cerebellum is classically known for its role in motor control,” Dr. Paukert said. “However, our findings are in line with current suggestions that the cerebellum also plays critical roles in non-motor functions, and that astrocytes are not only supporting basic brain maintenance, but they may actively participate in cognitive function.”

The coauthors included Manzoor Bhat, PhD, professor and chairman of cellular and integrative physiology at UT Health San Antonio. “The beauty of the studies reported by Paukert and coauthors is that they have been conducted in real time in living and breathing animals using state-of-the-art technologies,” Dr. Bhat said. “The findings will open up new avenues of defining the brain circuits that ultimately determine the state of alertness, and how chemicals that interfere with those circuits essentially dampen this inherent vigilance system of the brain.”

In this article:Addiction, alcohol, alcoholism, University of Texas Health Science Center at San Antonio
Up Next:

The Love- Hate Relationship of Teens and Smartphones: Is it Addiction?