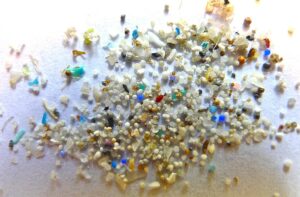 Everything that surrounds us is our environment. We react to it constantly and are in a give and take equation with it. Manmade molecules have contributed to myopic euphoria, but they are a bane to the environment. Heading the list are plastics. This article addresses the manner in which plastic invades our system and the repercussions of the onslaught.

Microplastics are tiny pieces of plastic material that vary greatly despite their similarity of being very small in size. Their composition can be any kind of plastic material, such as polyethylene (PE), polybutylene succinate (PBS), or polyvinyl chloride (PVC).

‘Nanoplastics’ is sometimes used to describe even smaller pieces of plastic, between 0.001 to 0.1 µm. Primary microplastics are already small in size when they are disposed of. Secondary microplastics come from larger pieces of plastic such as bags, bottles, and fishing nets that are disposed of and are subjected to weathering and then fragment into micro and nano plastics. These are most prevalent in oceans and are ingested by marine animals.

Environmental conditions, such as heat, cause the plastic to break into fragments known as microplastics, which invade our food. Some examples of plastic-based food packaging that contains microplastics include single-use water bottles, to-go containers, food cans, and storage foil.

These minuscule chemical components are of grave concern to human health because of their potential toxicity, carcinogenicity, and allergy-causing capacity.

Moreover, toxic plastic pollution is gradually creeping up the food chain. Chemical residues in microplastics are consumed by aquatic life, birds, animals, and humans. A startling find from a 2019 joint research study in Australia has revealed the extent of humans eating plastic on an average is one lego brick! It is a sobering thought.

Apples and carrots have the highest levels of microplastic particles. However, microplastics appeared in other crops such as peas, broccoli, lettuce, potatoes, radishes, and turnips. Studies have found microplastics in tea, salt, seaweed, milk, seafood, honey, sugar, beer, tap water, bottled water, vegetables, and soft drinks. A prominent researcher, Dr. O’Brien specifies that a single serving of 100grams of rice may well contain at least three to five milligrams of microplastic.

The next relevant question would be to understand how to tackle this menace in day-to-day life. Some simple lifestyle interventions are recommended. Some of these are…habitual consumption of filtered water, use of reusable crockery and cutlery, limited seafood intake and use of microbead-free beauty products, and natural fabric usage in day-to-day living.

Several research institutions as well as several international authorities, such as The European Food Safety Authority (EFSA) and the World Health Organization (WHO), have jumped into the foray and are studying the impact of microplastics in food and their connection with the biota of this planet.

At least five decades have gone by since research started, yet the term ‘microplastics’ was first used in 2004. Studying microplastics is quite complex due to particle size, constituents, shapes, additives and contaminants, and concentrations to name a few. This makes it challenging to compare results from several scientific studies in order to find similarities, minimize uncertainties, and draw conclusions.

In this article:Microplastics, polyethylene, toxic plastic pollution
Up Next: