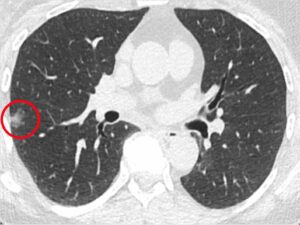 Scan of a patient in the Penn Medicine led-study with a lung nodule, circled in red. Source:Penn Medicine

Researchers at the Abramson Cancer Center at the University of Pennsylvania  have found a way to identify lung cancer at the cellular level in real-time during a biopsy, offering promise in the ability to detect the disease earlier and with more confidence. The findings, which build on previous Penn research, demonstrate that an imaging agent detected via guided technology during biopsies in real-time can effectively light up cancer cells that may have been too small to detect using existing technology. Based on the more easily identifiable presence of fluorescent cancer cells generated by the new imaging approach, five non-expert raters diagnosed the malignant or non-malignant tissue biopsies with 96 percent accuracy and made no false negatives on the 20 human biopsy specimens they reviewed. The research is published this week in Nature Communications.

The Penn team examined human cancer cells from patients who had a history of smoking. Researchers took the cancer cells and grew them with the normal cells in the laboratory to see how small a quantity of cell could be detected. Then, with an investigational imaging agent, Cytalux™ (pafolacianine) injection, paired with Cellvizio®, a probe and needle-based imaging platform, they discovered that integrating the technologies allowed researchers to detect cancer at the cellular level in real-time during biopsy in various preclinical models, including in culture, small animal models, and human tissue from patients undergoing surgery for lung cancer as part of an ongoing clinical trial. The researchers call the new technology NIR-nCLE, as it combines the cancer-targeted near-infrared (NIR) tracer with a needle-based confocal laser endomicroscopy (nCLE) system, which is modified to detect the NIR signal.

Biopsies of suspicious tissue are not always effective, because many times the concerning nodules may be too small to see and to remove for further testing. Not only does this leave many patients and physicians uncertain about whether cancer is present, it requires the need for additional biopsies and radiological surveillance until the nodule is big enough to see for removal and evaluation via a histopathologic evaluation, which can take several days to complete. Current medical technology does not provide real-time diagnostic information during biopsy.

Methods like NIR-nCLE, which aim to find these microscopic nodules, can offer greater precision in the identification and, later, removal of cancer cells.

“The emerging ability to light up a single cell that may be invisible to the eye provides a great opportunity to give patients the best chance at an early diagnosis before cancer spreads,” said Gregory T. Kennedy, MD, a resident in General Surgery at Penn. “This unique approach has the potential to improve the information we get from biopsies and it may increase our chances of identifying cancer early.”

According to the Centers for Disease Control and Prevention (CDC), lung cancer is the third most common cancer in the United States, and more people – both men and women –  die from this cancer than any other type. More than 236,000 patients are diagnosed with the disease each year, and more than 130,000 people die of it annually.

“This research shines a light on the possibility of being able to more accurately identify and diagnose lesions that could be cancerous, even those that are very small and may evade our typical diagnostic capabilities,” said Sunil Singhal, MD, Chief of the Division of Thoracic Surgery, the William Maul Measey Associate Professor in Surgical Research, and director of the Center for Precision Surgery at the Abramson Cancer Center at Penn. “The quest to diagnose lung cancer in earlier stages is a centerpiece of our research since early detection is so closely connected to chances for successful treatment.”

The researchers hope this approach can be used to help with earlier diagnosis of other cancer types. Penn investigators and industry partners have pioneered additional targeted imaging technologies for lung, brain, breast, sarcoma, head and neck, and urinary tract cancers. The U.S. Food and Drug Administration (FDA) recently approved Cytalux for use in adult patients with ovarian cancer as an add-on during surgery to identify cancerous lesions.

The Center for Precision Surgery and researchers from its half-dozen affiliated labs have developed several other targeted imaging technologies since its founding in 2015.  The Penn physicians and researchers have tested these approaches in clinical studies involving more than 1,200 patients at Penn to date.

In the new study, Cytalux, made by On Target Laboratories, was detected using Cellvizio®, the real-time in vivo cellular imaging platform from Mauna Kea Technologies.

In this article:Cancer, imaging, research, University of Pennsylvania
Up Next:

Study shows that kidney cells are pumps, not filters.