A nasal spray to provide protection against the COVID-19 virus has been formulated by researchers at the University of Birmingham, UK, using materials already cleared for use in humans. 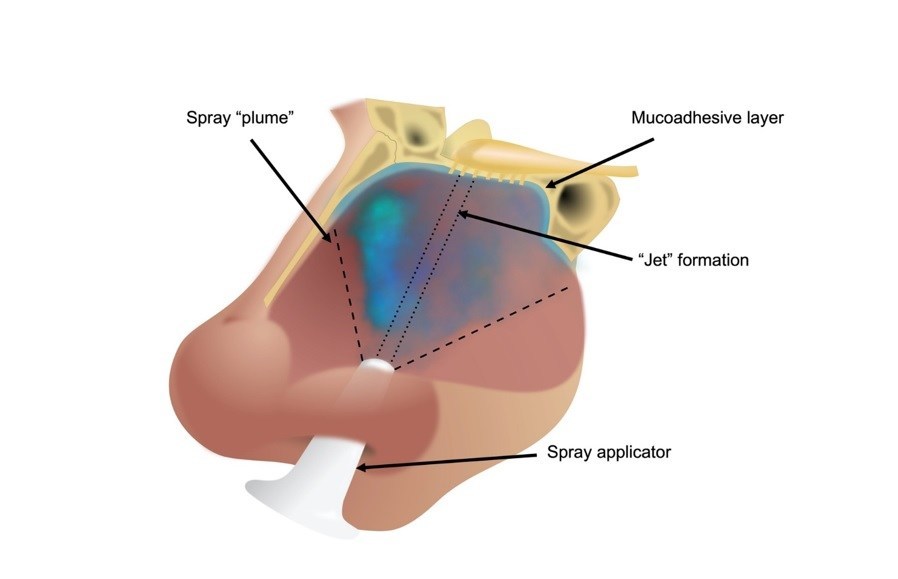 The formulation plumes from a typical nasal spray applicator

A team in the University’s Healthcare Technologies Institute formulated the spray using compounds already approved by regulatory bodies in the UK, Europe and the US, and widely used in medical devices, medicines and even food products.  This means that the normal procedures to take a new product to market are simplified, and the nasal spray could be commercially available very quickly.

The formulation consists of an antiviral agent, λcarrageenan, and a gellan polysaccharide, both of which are already manufactured to pharmaceutical grade.

A pre-print study (not yet peer-reviewed) describes cell culture that tested the ability of the formulation to inhibit COVID-19 infection.

These studies showed the formulation can deliver significant (minimum of p<0.05) suppression of infection in cell cultures challenged by live virus compared to untreated controls, an effect seen up to 48 hours and when diluted many times.

University of Birmingham Enterprise has filed a patent application covering the sprayable antiviral formulation for use as an oral, nasal or multi-surface spray, and is now seeking to license the patent to an organisation that is committed to manufacturing a consumer product and managing its distribution it to the widest possible audience.

The researchers led by Professor Liam Grover and Dr Richard Moakes set out to engineer a spray that could cover the inside of the nose evenly, and stay at the site it is sprayed onto.

The research team screened FDA-approved polymers for their muco-adhesive properties and their ability to ‘plume’ when sprayed using a typical nasal spray applicator.  They then modelled the physical properties of a range of polymers, and quickly settled on gellan polysaccharide, which will improve the longevity of the application by ensuring the nasal spray stays inside the nose, before testing and characterising mixtures of gellan and λcarrageenan at various proportions, to find the formulation that delivers optimum ‘sprayability’ and viscosity.

The team also determined the formulation’s ability to prevent infection in cell cultures challenged by virus. They showed significant suppression of the infection (minimum of p<0.05) up to a dilution of 1/300 in comparison with the untreated control group, and complete, highly significant (p<0.001) inhibition of infection at dilutions above 1/30.

In use, this should equate to an antiviral nasal spray that catches and coats the virus inside the nose, preventing its uptake by the body, so it can be eliminated via the usual routes (either nose-blowing or swallowing).  In the eventuality that virus particles are passed to another person via a sneeze or cough, the antiviral effect would reduce the risk of transmission of active viruses.

The team believes the spray could be particularly useful in areas where crowding is less avoidable, such as aeroplanes or classrooms and regular application of the spray could significantly reduce disease transmission.

Dr Richard Moakes commented: “This spray is made from readily available products that are already being used in food products and medicines, and we purposely built these conditions into our design process. It means that, with the right partners, we could start mass production within weeks.”

“Products like these don’t replace existing measures such as mask wearing and handwashing, which will continue to be vital to preventing the spread of the virus,” adds Dr Moakes. “What this spray will do, however, is add a second layer of protection to prevent and slow virus transmission.”

In this article:Coronavirus, Covid-19, University of Birmingham
Up Next: