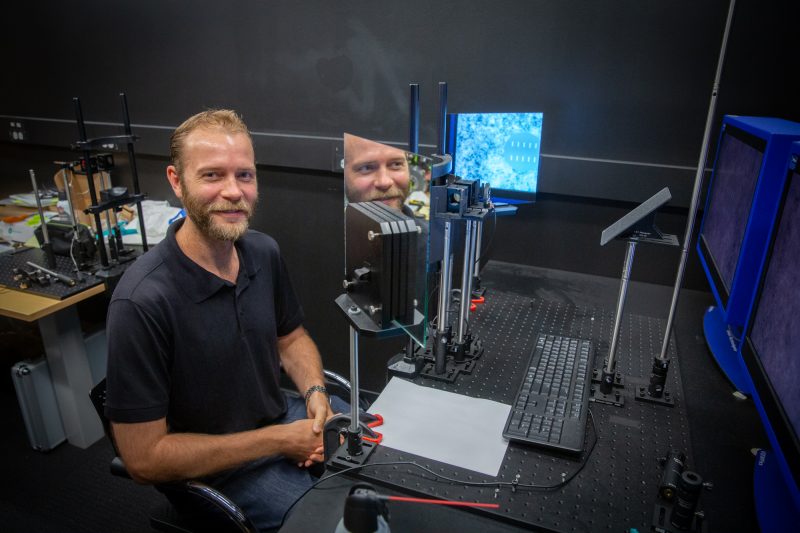 The lab of neuroscientist Johannes Burge (above) focuses on how the human visual system processes the images that fall on the back of the eye. This line of work, closely related to a 100-year-old illusion called the Pulfrich effect, could have serious public safety and public health implications. Credit: University of Pennsylvania

As people age, the ability of their eyes to focus close up declines. When a team led by Penn psychologist and neuroscientist Johannes Burge discovered that monovision, a common treatment to counter this deterioration, also causes dramatic visual misperceptions of moving objects, the researchers set out to find a better, safer answer to the problem.

Monovision puts different lenses in each eye, one for focusing nearby, the other for focusing far away. It works because it tricks the brain into preferentially processing the sharper image and at the same time, suppressing the blurrier image. But it also causes the brain to miscalculate the depth of moving objects, a problem Burge’s team dubbed “the reverse Pulfrich effect” for its relationship to a 100-year-old perceptual illusion called the Pulfrich effect. In some circumstances, the reverse Pulfrich effect can cause errors in depth estimation that can be as large as the width of a traffic lane.

“These exact illusions can occur in real life,” says Burge, an assistant professor in the Department of Psychology. “A good friend of mine got one eye dilated at an optometry visit. As he walked out of the clinic, a cyclist was riding from left to right in front of him. He jumped out of his skin because he thought the cyclist was going to plow full speed into the back of a car.”

Burge and colleagues had previously shown that darkening the blurry lens could fix the problem. But they’d only done so with trial lenses, the special lenses an eye doctor uses to determine the vision correction a person needs. “We had an obligation to demonstrate that the original findings hold with the most common delivery systems for monovision, which are contact lenses,” Burge says. In a paper published in the Nature journal Scientific Reports, that’s precisely what they showed.

For this work, the researchers conducted five experiments with four participants, two men, two women, all between ages 25 and 30. Each experiment answered a slightly different question. 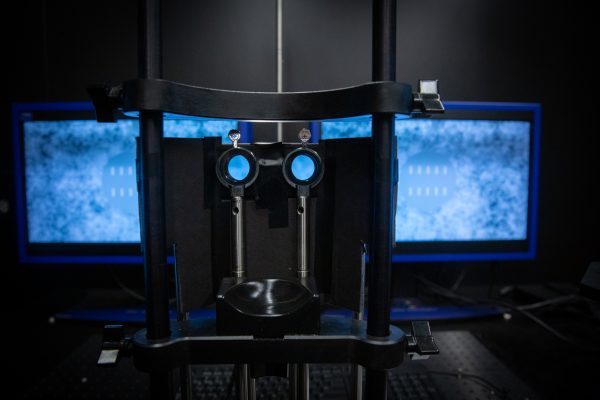 Burge and colleagues use a haploscope—essentially, a laboratory version of a 3D movie house—to show a participant two separate images at the same time, one for each eye. Credit: University of Pennsylvania

The first aimed to replicate with contact lenses what the research team had already proven using trial lenses. “We confirmed that the illusion we had previously demonstrated with trial lenses also occurs if the blur differences are introduced with contact lenses. That was step one,” Burge says. “Step two was to answer the question, is there anything different about the size of the illusion? Might the illusion be bigger or smaller without magnification?”

Trial lenses of different powers change the amount of blur and image magnification. Contact lenses, conversely, tend to differ in blur levels only, making them a strong tool to test the influence of magnification on the visual distortion. It was important to use the same individuals from the contact lens experiment, Burge says. “Otherwise, we wouldn’t know if the differences were due to the people or to the magnification. It turns out, magnification doesn’t have any impact at all on the size of the effect.”

Experiments three and four focused on tinting. “Blurry images are processed more quickly than sharp images, and dark images are processed more slowly than lighter images,” Burge says. “A blurring lens speeds up how fast the image is processed. A darkening lens slows processing down. If a blurring lens is tinted, those two effects can cancel each other out.” But exactly how much darkening is needed? Burge and colleagues first tested just darkening the lenses. Next, with some simple calculations, they predicted the necessary tint for each blur level. Then, they validated the predictions by showing tint and blur really can eliminate the visual misperceptions.

The final experiment looked at what happens with magnification alone. “We just wanted to rule out the possibility that magnification, by itself, can impact processing speed,” he says. “In fact, it has no impact at all.”

Burge says this work is an important step toward developing a clinically relevant solution to the inadvertent negative side effects of monovision. But there’s more work to do, particularly in real-world settings with rich visual environments rather than in a lab using a simple two-color visual field. They still need to understand the effect of overall light changes, for example, what happens at dusk and at night, as well as create a method that produces similar quality data to what they get in the lab but in much less time.

“This is an important follow-up study to the one we published last year because it brings us closer to practical applications,” says Burge. “It uses contact lenses, the lenses that many real patients with monovision corrections wear.”

In this article:eye health, monovision, research, University of Pennsylvania
Up Next:

Amount of time spent on the smartphone not related to poor mental health.