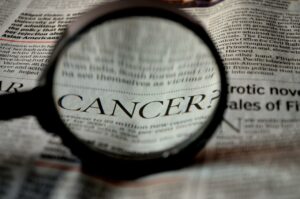 A team of Yale-led researchers can now quantify the factors causing changes in the DNA that contribute most to cancer growth in tumors of most major tumor types.

They write in a new paper, published in Molecular Biology and Evolution, that their new molecular analysis approach brings clarity to a longstanding debate over how much control humans have over developing cancer across time.

Looking at the instances of specific genetic mutations can reveal the extent to which preventable exposures like ultraviolet light caused tumor growth in 24 cancers, said Jeffrey Townsend, Ph.D., the Elihu Professor of Biostatistics in the Department of Biostatistics at YSPH.

“We can now answer the question — to the best of our knowledge — ‘What is the underlying source of the key mutations that changed those cells to become a cancer instead of remaining normal tissue?’” he said.

Some of the most prevalent cancers in the United States are known to be highly preventable by human decisions. Skin cancers like melanoma emerge in large part because of prolonged exposure to ultraviolet light, and lung cancers can often be traced back to tobacco use. But scientists have long struggled to gauge how much any individual’s tumor developed as a result of preventable actions compared to aging or “chance.”

Previously, scientists have shown that they can reliably predict how certain factors that cause specific mutations that alter the genome in tissues. By combining this knowledge with their method that quantifies the contribution of each mutation to cancer, Townsend and his colleagues showed the specific percentage of the blame to be assigned to known and unknown but identified factors in the emergence of cancer.

“That gives us the last puzzle piece to connect what happened to your genome with cancer,” he explained. “This is really direct: We look in your tumor, and we see the signal written in your tumor of what caused that cancer.”

They write in their report that some cancers are more controllable than others.

For example, preventable factors account for a large part of the formation of tumors of the bladder and skin. However, they found that prostate cancers and gliomas are largely attributable due to internal age-associated processes.

Local populations or professions who suffer from inordinately high levels of cancer may also be able to use the findings to discover instances of exposure to carcinogenic substances, Townsend suggested. The idea seems promising, he said, because capturing the proportion of factors could potentially expose the underlying causes which led to tumor growth.

“It can be useful in terms of giving people feedback that lets them know what the causes of their cancer are,” he said. “Not everyone may wish to know. But on a personal level, it may be helpful to people to attribute their cancer to its cause.”

Not all genetic changes that lead to tumors are incorporated into the current approach, so that more research is needed to fully understand complex genetic changes like duplicated genes or chromosomes. Scientists continue to discover new factors that also lead to tumor growth, so Townsend cautioned that it current approaches do not provide a “complete accounting.” And his team’s method remains untried on many less-frequent cancers that the group has not yet studied.

Still, the findings could help public health officials to quickly recognize sources of cancer before they lead to more tumors, thereby saving lives.

“Public health intervention targeted at minimizing exposure to these preventable signatures would mitigate disease severity by preventing the accumulation of mutations that directly contribute to the cancer phenotype,” the researchers wrote in the study.

Co-researcher Jeffrey Mandell works at the Yale Department of Computational and Biology Informatics as a Ph.D. student. Vincent Cannataro, the study’s first author, is an assistant professor of biology at Emmanuel College.

In this article:Cancer, research, tumour, Yale School of Public Health
Up Next: