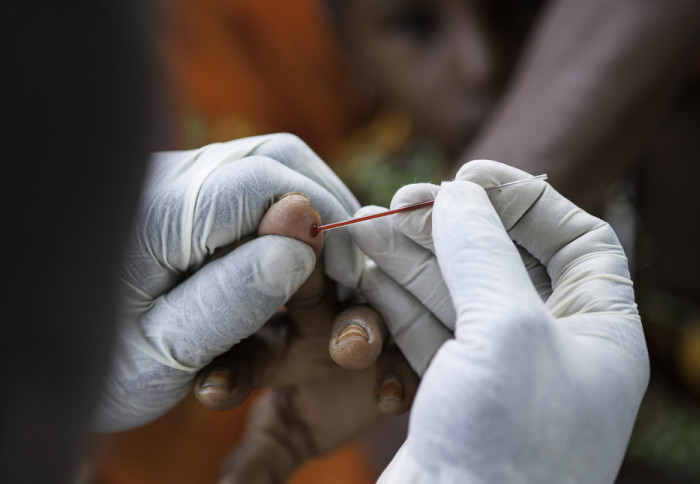 The test could be administered with a single drop of blood. Credit: Sebastian Bolesch

A new rapid diagnostic test that can differentiate between different strains of Chagas disease parasite could lead to a widespread testing programme.

Researchers from Imperial College London, the University of Kent, the London School of Hygiene and Tropical Medicine, and the charity TroZonX17 have developed a blood test that can identify the main types of parasite that cause Chagas disease, which affects eight million people primarily in Latin America.

This rapid diagnostic test (RDT) could be performed cheaply and quickly using a small sample of blood. The details of the test are published in Scientific Reports.

Chagas disease affects some of the poorest areas of Latin America and is increasingly becoming a global health threat. The disease is transmitted via a ‘kissing bug’ that carries the parasite Trypanosoma cruzi. Left untreated, the parasitic infection can permanently damage the heart, nervous system or intestines and lead to lifelong disability and death.

However, the initial symptoms are usually mild, which makes early detection difficult without a diagnostic test; the World Health Organization estimates that as few as one per cent of cases are detected. Existing tests are expensive, and no point-of-care rapid tests can differentiate between the six principal groups of the parasite, which tend to vary by geographical region.

Co-author Professor Stuart Haslam, from the Department of Life Sciences at Imperial, said: “Chagas is a devastating disease that is historically difficult to tackle. Our new test could dramatically change that picture, helping control a disease that currently runs unchecked through millions of people.”

Study co-author and TroZonX17 CEO, Barrie Rooney, said: “We made a synthetic, glycosylated antigen that mimicked a T. cruzi strain-specific glycoprotein and, in collaboration with research scientists in Latin America, we tested the antigens on their archived blood samples. In this pilot study, the antigen identified the people who carried the corresponding specific strain of the T. cruzi parasite.”

Expanding to other diseases

The technique used could also be applicable to a wide range of other diseases, according to co-author Professor Haslam: “Our work clearly shows the importance of the glycosylation of the synthetic antigens used in Chagas disease diagnostics. This is an important lesson for improving diagnostics for other infectious diseases, including COVID-19.”

Development of new tests for diagnosing Chagas disease in the early stages, when treatment would be most effective, has remained complicated for so long, in part, because affordable diagnostics for neglected diseases are not attractive profit-making opportunities for large companies.

TroZonX17 will now use the new specific antigens to support the development of a fuller range of affordable RDTs for widespread access to strain-specific diagnosis, even in very remote locations.

In this article:Chagas disease, diseases, Imperial College London, Syndromes
Up Next: